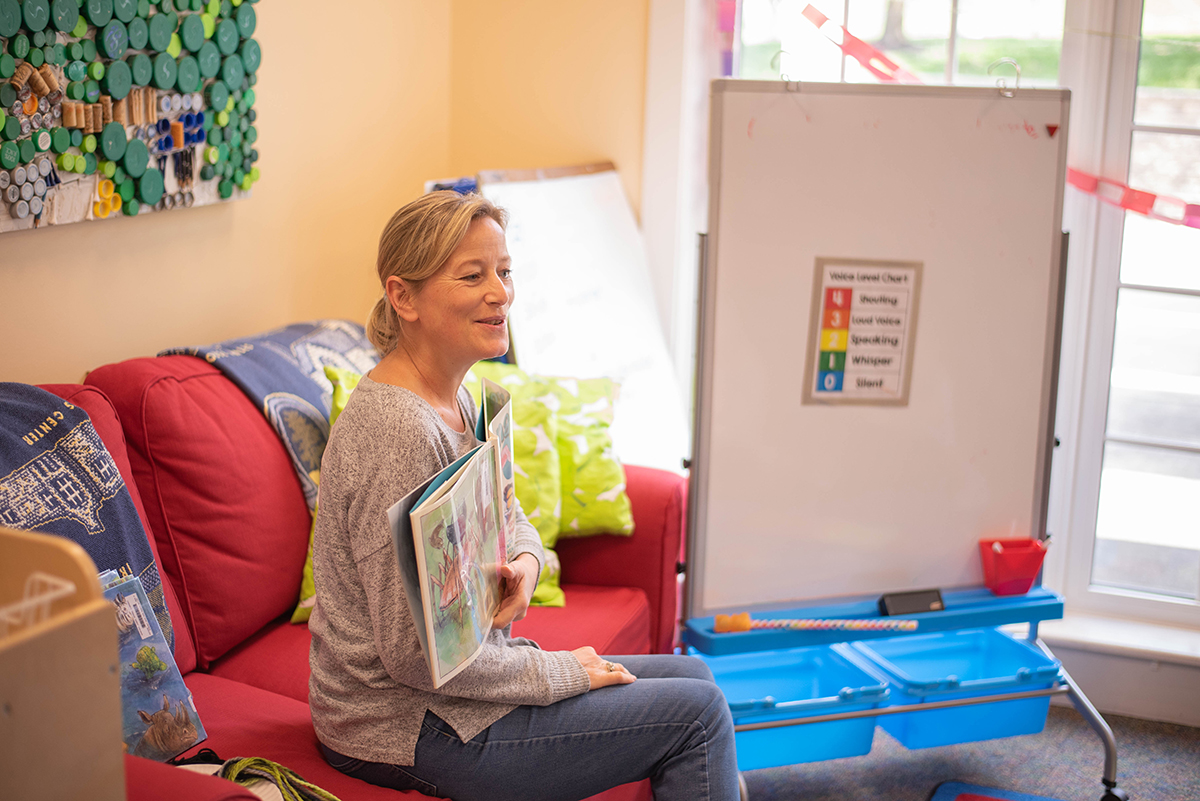 This past school year–in fact the past few–have been filled with some tough times, and parents are often asked really hard questions by some of our littlest learners. With all that’s going on in our world, our nation, and our schools today, it’s hard to know what to say about these very complex topics.

Jamy Haughey is the Director of Diversity, Equity, and Inclusion at Sanford School. She also teaches Upper School math and science courses.

Growing up in a predominantly white community in suburban South Jersey, there were not many people who looked like me, nor were there many ways in which I saw myself reflected either through the curriculum that my teachers used or within the media that I was exposed to. Not seeing myself reflected in my daily life left me with a yearning for belonging; I wanted to be seen, heard, and valued. One of the first times when I meaningfully saw myself was in English class during my junior year when I read The Joy Luck Club by Amy Tan. Despite not being Chinese American, there were many instances throughout the book where I saw mirrors of my own experience growing up as a first-generation Filipino American, and I was able to relate to the daughters’ search for identity in a world between cultures. It was then that I realized how impactful it was to see my own story and struggles as an Asian American written in pages before me. Seeing myself represented in that story made me feel a sense of belonging in an incredibly significant way. I felt seen.

Oftentimes, Black History Month is an opportunity for educators to share the biographies of traditional prominent Black figures of the past: Martin Luther King Jr., Harriet Tubman, Rosa Parks, Ruby Bridges. February has been a month that highlighted the struggle of the Black community, with an implication that the struggle was a thing of the past, and that the concept of racism, prejudice, and discrimination was relegated only to a time prior to the Civil Rights Movement.

The Origin of Black History Month

Without a doubt, such prominent figures have contributed greatly to the advancement of Black people, but focusing only on stories of struggle can limit the potential of the month-long celebration of Black History.

Since its inception, Black History Month has been a time to reflect on the fight for equity and celebrate the culture, accomplishments, and achievements of many Black Americans, who fought for and continue to fight for justice.

How can you honor Black History?

Beyond the month of February

Finding the balance between recognizing the historical struggles that Black America has faced, and continues to face, while looking ahead to the future is hard.

Being intentional about celebrating, amplifying, and highlighting the Black experience and Black joy not only during Black History Month, but throughout the entire year, takes deliberateness. Sanford strikes this balance well: As an institution, we seek to learn about the Black trailblazers of the past, and acknowledge the struggle, resistance, and strength that Black America needs to overcome adversity, while simultaneously looking toward the present and the future to find current history makers.

Raising Our Voices About Coronavirus Racism 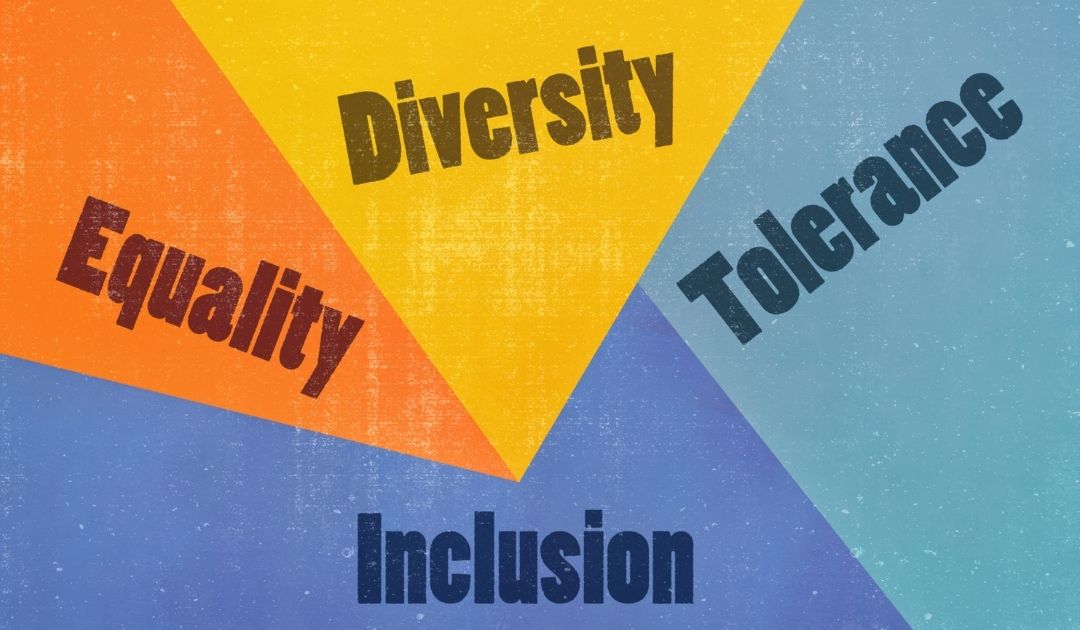 During the past year, school leaders throughout our country have shared countless messages about the COVID-19 pandemic. Information about testing, vaccines, safety protocols, and many other topics has been featured in newsletters, videos, and school communications.

One pandemic-related matter that has not been addressed frequently is the rise of anti-Asian hate, exclusion, and racism that is taking place throughout our country. Since the start of the pandemic, Stop AAPI Hate and Asian Americans Advancing Justice have collectively reported more than 3,000 cases of anti-Asian incidences of violence. In recent weeks, there has been a dramatic rise in anti-Asian attacks and crimes in California and New York. Many of these were unprovoked violent assaults. Not surprisingly, many Asians in our community are experiencing trauma, fear, and despair.

As a school leader, I am committed to using my platform to denounce hate, violence, and racism no matter where it occurs—and I condemn those who participate in these acts. My hope is that all school leaders raise their voices and support members of Asian American and Pacific Islander (AAPI) communities locally and across our nation. Likewise, every individual has an opportunity and responsibility to do their part in the fight against bigotry, hate, and violence.

Talking with Young Children about Race and Racism 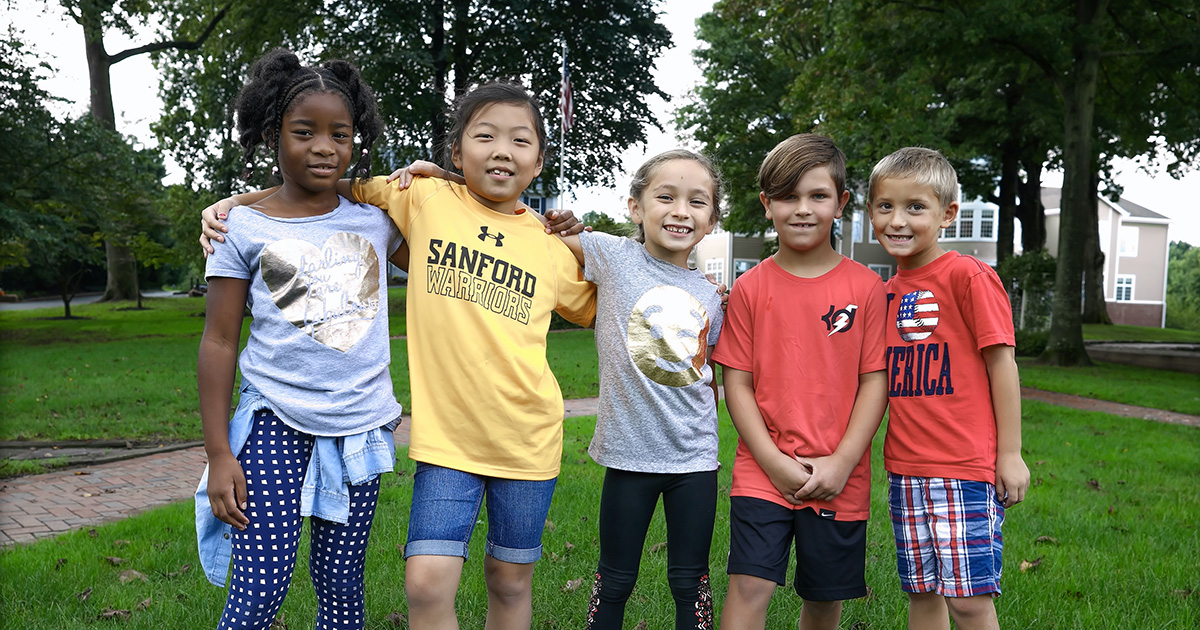 Recent events refueling the Black Lives Matter movement have some parents asking how to facilitate or deepen conversations about race with their children. As parents ourselves, we understand the importance of normalizing conversations surrounding race with our youngest learners as we all strive toward being antiracists. Research shows that children as young as three months are able to discern faces of different races, and these children look at the race of the caregiver for a longer time than other races [Kelly et al, 2005]. Children as young as two years old use race to explain behavior [Hirschfeld, 2008]. By five years old, children show many of the racial attitudes of the adults in their culture. They have already associated some groups with higher status than others [Kinzler, 2016]. It is, therefore, never too early to have direct conversations with children about race, racism, and antiracism.

Posted by Authored Collaboratively by Teachers in History & Global Studies on February 7, 2020 at 12:00 PM 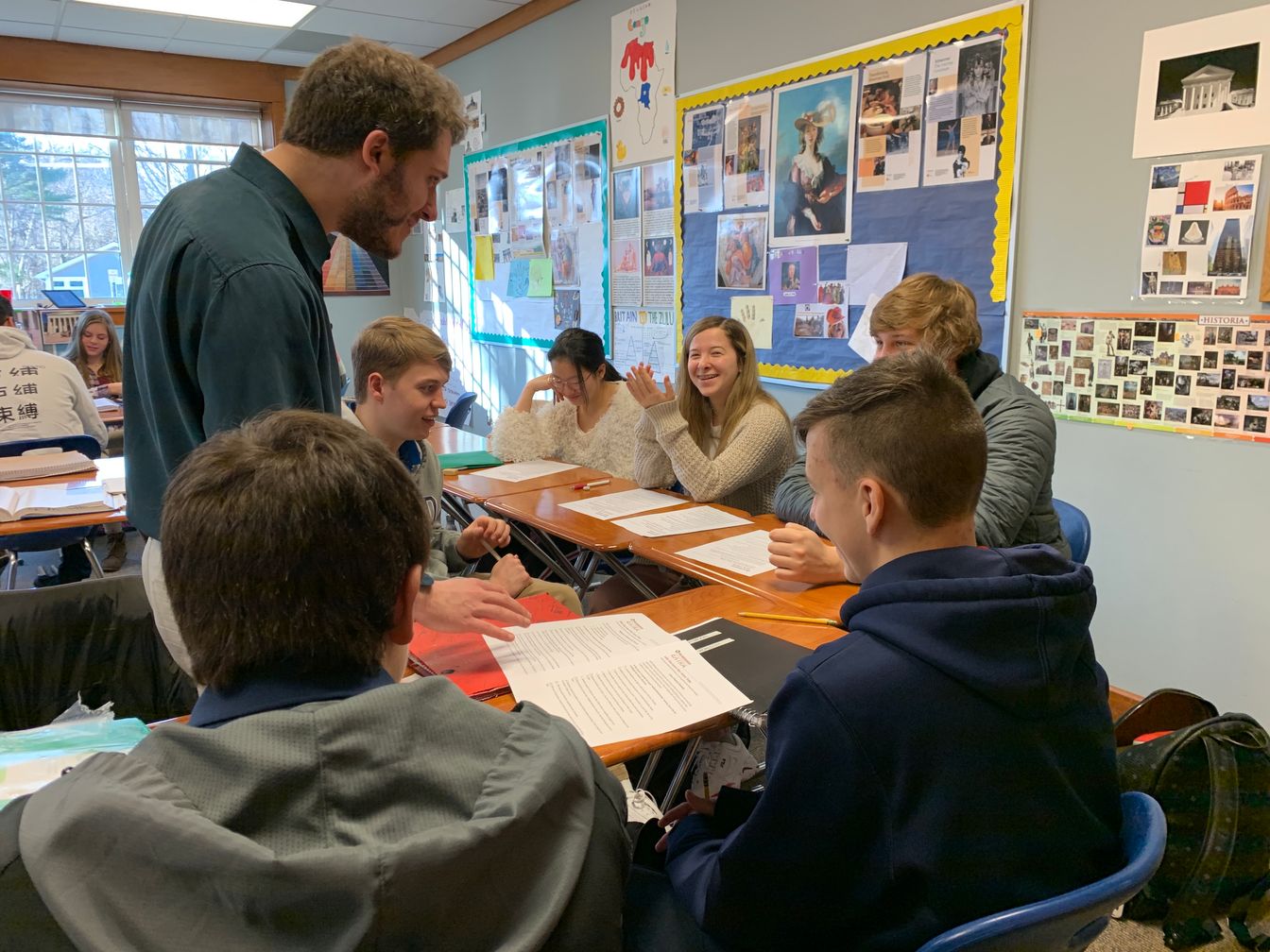 The National Council for History Education describes twelve practices that make up what they term History’s Habits of Mind, which are the skills that students develop when they are deeply engaged in rigorous history learning. While all of the skills are valuable, there is one that seems especially relevant during Black History Month: Utilizing multiple perspectives for comprehensive explanations. Incorporate this skill in the classroom by:

Posted by Authored collaboratively by the faculty of Sanford School on August 9, 2019 at 2:00 PM

Sanford Middle and Upper School students have the opportunity to travel abroad with teachers and classmates over spring or summer break. This is part of our Sanford experience. Take a look at our gallery below to learn more about these experiences.
END_OF_DOCUMENT_TOKEN_TO_BE_REPLACED
0 Comments Click here to read/write comments

4 Ways To Create An Inclusive Community 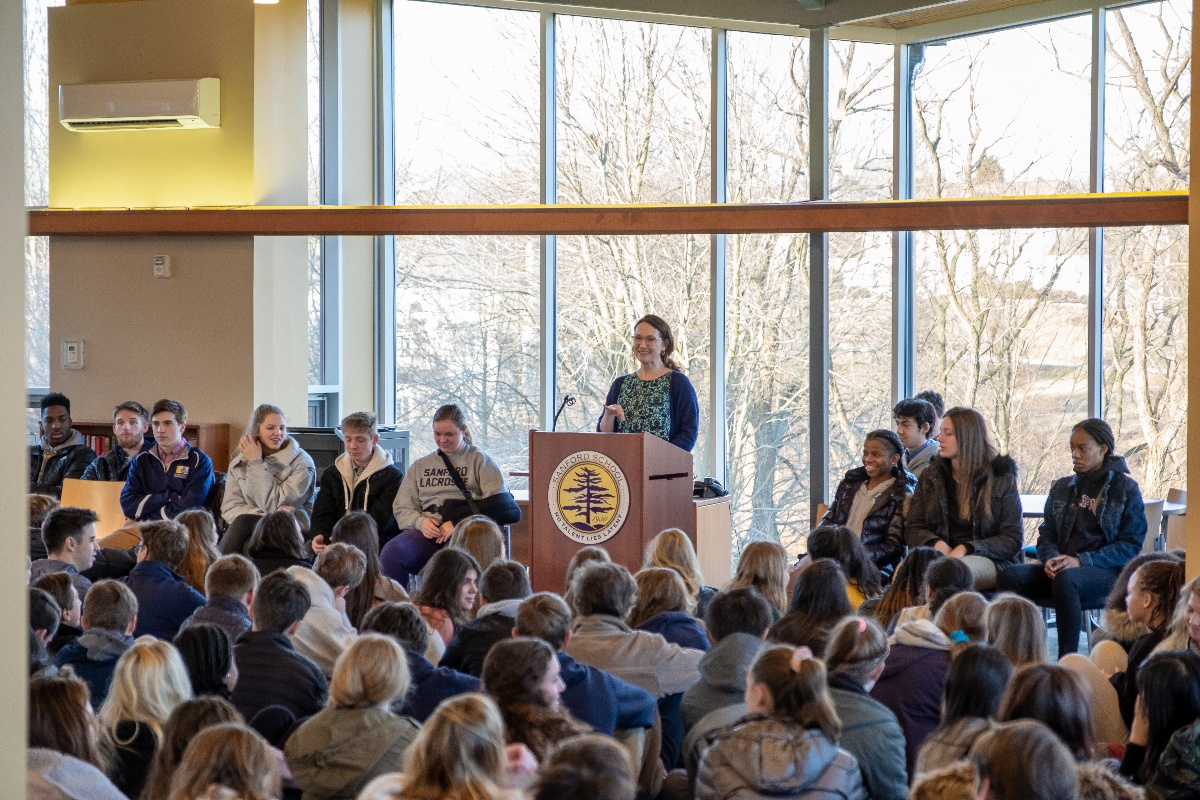 The meaning of the word  diversity has been somewhat diluted by overuse and eclipsed by ambiguous interpretations. While some hear the word and think primarily about race or gender, the more expansive definition includes an array of identity markers. Sanford School’s Statement on Diversity utilizes that expansive interpretation:

Throughout the school’s history, Sanford has celebrated and respected the unique talents of our community members. We continue to create an inclusive, nurturing environment that instills a healthy respect for differences. Sanford values diversity at our core, including, but not limited to: culture, ethnicity, race, spirituality, gender, gender identity, sexual orientation, learning styles, socio-economic status, and interests.

It is widely accepted that there are significant benefits for all who are immersed in a diverse community, from learning how to appreciate and respect differences to acquiring lifelong skills like communication and listening for understanding. Achieving a diverse community, though, does not inherently lead to a community which values inclusivity and equity. Within any organization that values differences, there is work to be done to help each individual feel important, valued, known and respected. This requires high levels of empathy and a commitment to having difficult conversations. So, what are some ways to work towards this ideal? Where there exist challenges, there are also opportunities for education, self-reflection, and growth. Below are four suggestions to take advantage of the opportunity an active part of creating an inclusive community.

From Attitude to Activism: To Kill a Mockingbird and Social Justice 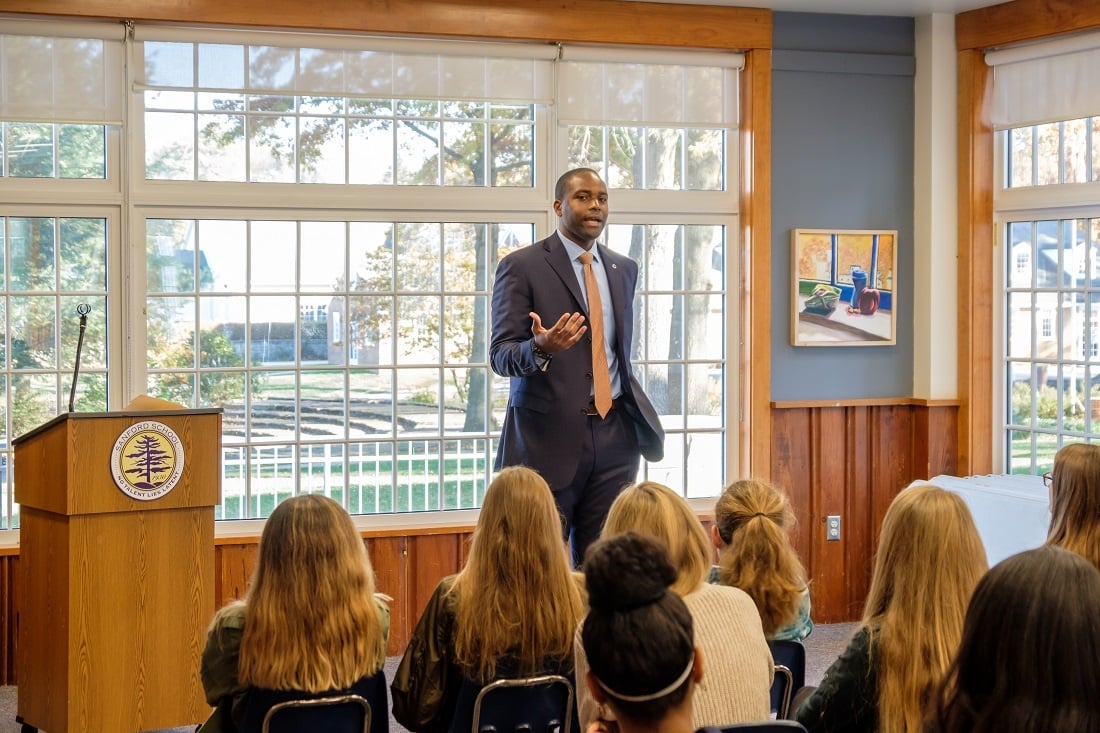 As any former adolescent can tell you, teenagers can be defiant at times. This resistance often comes from being constantly told what they can and can't do. We are evolutionarily wired to push the boundaries during adolescence, when, more often than not, we hear “You can’t do that!” rather than more positive enforcers. The article, "Can Teenage Defiance Be Manipulated for Good?", supports that defiance can be harnessed in a way that allows for enlightening learning opportunities and avenues for inquiry.